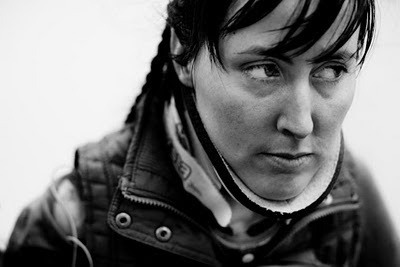 Acutely focused on her return home to Carmel, Rachael continues to work everyday getting stronger and poised for the big change coming. It is now official that on January 4th, 2011, Rachael Elizabeth Short will be going home after over 2 months in the hospital.

Rachael's circle has been working hard getting things ready at her future home. "The Carmel house is coming along. New pathways, new bathroom, and the black widows are getting removed," says Rachael. She lights up when she talks about going home and is very thankful for all the work everybody has been doing to help make it possible by retrofitting the house.

"We just got a little thing for the back of my truck so I can roll the wheel chair onto it. Then I am going to get a chauffeur. The wheel chair that I am getting is $28,000 and insurance is going to cover 70%. So that is good. But what the heck! I have never even had a car that has been that expensive. All this stuff costs a lot of money. I am getting an iPhone 4 cause I can use it with my knuckle... and then I am going to get an Apple TV so I can control the TV from my IPhone. Then hook my computer up to it and go crazy."

I joked around about it sounding like a pretty plush Christmas and Rachael responded, "Ya, expect I have to pay for all of it." 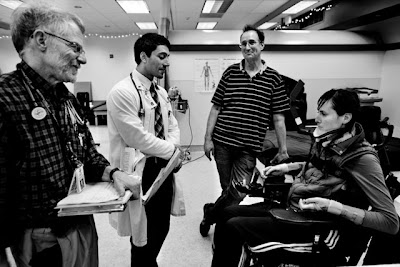 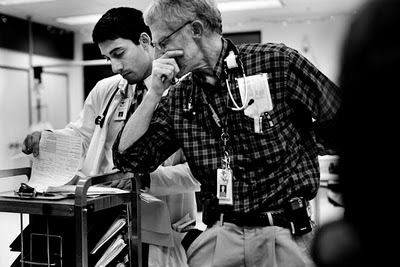 When I asked Rachael what else is new she stuck her tongue out at me, smiled, and said, "I still have a whole but I do not have a trach, my stomach tube is gone and my filter out of my neck is gone. that hurt really bad."

"Dr. Leibovitz, I hate you," she joked due to the pain of getting all the tubes and filters out that had been a part of her for over 6 weeks. "My right shoulder really hurts too, cause I was starting to pump too much iron"

Another thing that was new, exciting and bit scary was that for the first time Racheal was out of her bed and out of her chair and propped upright in a standing brace. The contraption allowed Rachael to have the sensation of standing upright again for the first time. Due to her low blood pressure she become a bit dizzy and saw a few spots so it didn't last to long but it was an exciting moment and a vision to hold onto. 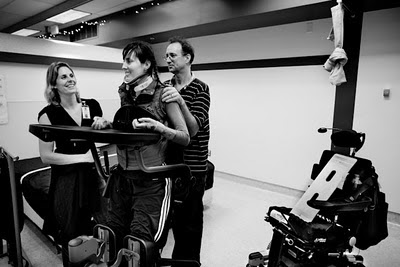 Along with Rachael and her family, we wish you all Happy Holidays and an awesome New Year. Thank you for your continued support, prayers, and good thoughts. Counting down the days until the 4th of January and still looking up with hope. 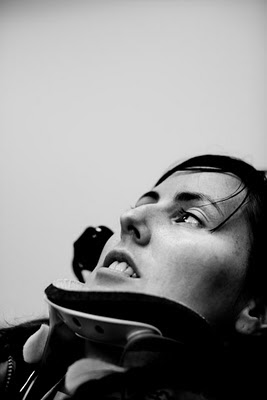 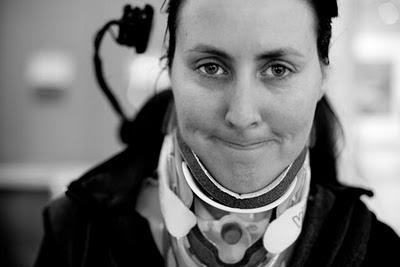 "My life changed 40 days ago; not for the better or worse. No. Wait.

I'm not sure if the 40 days have flown or crept by. No. Wait. That's not right; it hasn't flown by... I've spent hours staring at the white hospital ceiling. 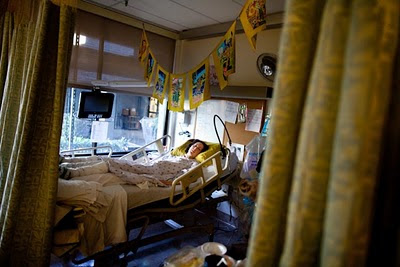 Ok. Day 41, and Rachael is still in the hospital. Not sure what direction to take this. Should I make people laugh or cry? Or both? Ok. Geez, it took me a month just to write my best friend Vanessa Auburn's wedding speech.

Ok. Day 41. Days and weeks blur together, but my focus is on January 4th, when I'll be able to go back to Carmel. In the weeks to come, the staff at wherever we are, are preparing me for my life away from the hospital. I'm trying to find an electric wheelchair that will allow me to go down Ocean Ave to Carmel beach, then back up to Cassaonova St, and to my gallery, without sending me flying out of it. 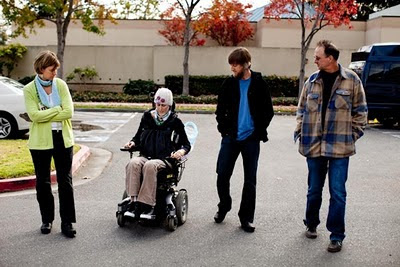 I'm also in search of a caregiver for around 4 hours in the mornings, an occupational and physical therapist with spinal cord injury knowledge, and a trained service dog.

Time in the hospital has allowed me to... 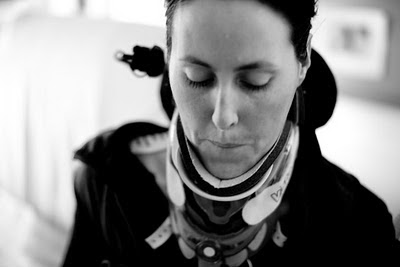 I've been overwhelmed by the generosity of friends, family and the community who have pulled together in this trying time. I truly believe that things happen for a reason, and that some good will come from this tragedy, and have faith that I'll one day be back in Big Sur, standing on my own two feet. Call me crazy, but that's what I'm thinking. 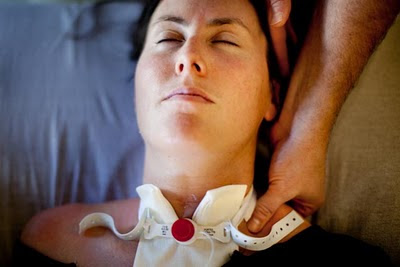 One month after the accident, Rachael is continuing her rehabilitation progress. She recently moved downstairs to a new room right next to the gym where she spends a lot of her time. The new space is shared with 2 other patients and signifies a stable condition. Rachael is breathing on her own for most of the day and is ready to put the vent, that was helping her breathe, aside for good. Thanks to her efforts and the care of family and the staff at SCVMC, she is getting stronger everyday. 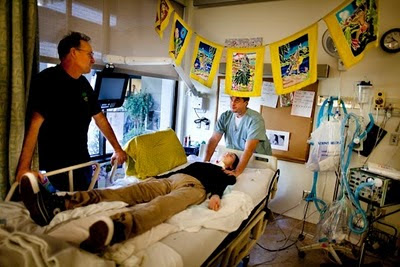 The doctors have said that the projected date for Rachael to return home to Carmel is January 4th. And while Rachael is half way home from the hospital, she has a long road ahead of her. The goal at this point in her recovery is learning how to become as self-sufficient as possible prior to her release date. Not an easy task.

As strength returns very slowly to her arms, Rachael now focuses on regaining some dexterity in her hands. She can move her thumb every so slightly now. Her hand dexterity is critical for her to be able to do just about anything. Her wrist control is improving along with driving skills and she usually only runs you over in her motorized wheelchair now if she means to.

When I asked Racheal what trying to use the keyboard again was like she giggled in frustration saying, "It's like trying to get one of those stuffed animals with the machines with the claws that open every time you think you have it." 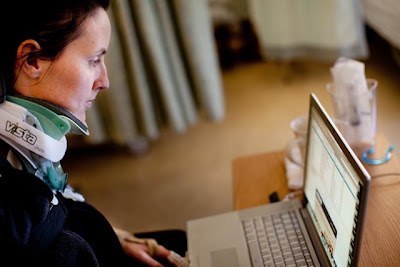 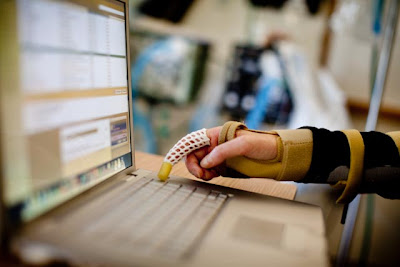 The last time I visited Rachael she said something that stuck with me. When I asked her about how we were doing communicating her story with the blog she said sarcastically, "What is with all the smiling photos? I am not happy."

While Rachael may not be happy about her situation, every time I visit I still see her determination and strong will. I see moments where her smile shines through and her positivity persists. She is still the light. But this story is not just about the smiles and successes. It is also about the challenge of what she is going through.

One of the toughest things of late has been hearing the doctors and staff coach Rachael all day long about how the rest of her life is going to work. It is a bit overwhelming to hear the information over and over again and the realization of the situation as it currently stands in the professional opinions of the staff. The dreams still remain, but understanding some of the facts of what it will be like to be back in Carmel at first are hard to swallow. 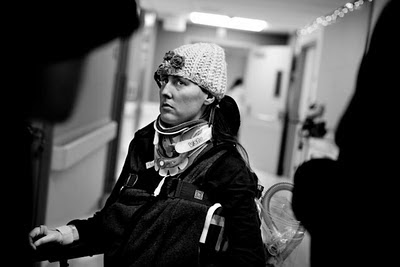 Racheal is faced with a difficult task. She must balance a fine line between keeping the hope alive of a full recovery someday at the same time as accepting where she is today. In order for Rachael to make progress she has to deal with the task in front of her and the information given to her, and work toward her goal everyday.

Looking into options for vehicles was one of the scenarios she faces today while keeping the dreams of tomorrow in tact. 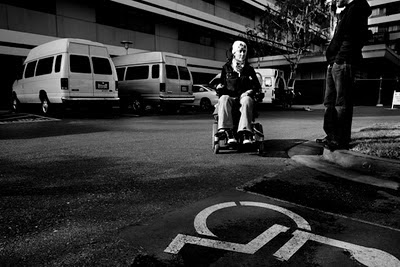 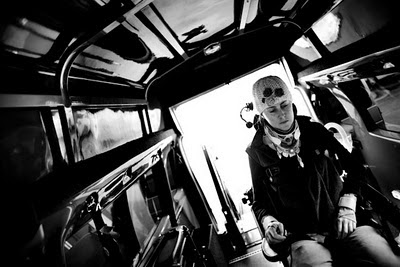